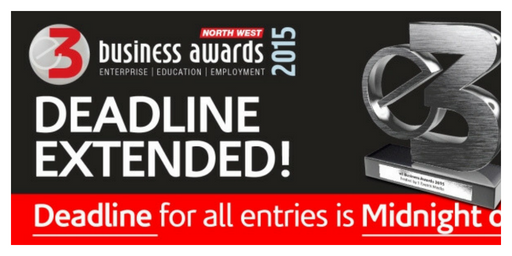 Companies, charities and entrepreneurs wishing to enter the 2015 E3 Business Awards have until midnight on Tuesday 7th April 2015, to submit their nominations.
The awards evening itself will take place on Thursday 11th June at the Macron Stadium in Bolton.

The E3 Awards celebrate the work of North West businesses and individuals whose work is having a positive effect upon people’s lives, local communities and the regional economy. There are 16 award categories this year, which is four more than last year, and the extra categories have drawn scores of additional nominations. Such has been the rate of new nominations, in fact, that the organisers, 1 Events Media, have extended the deadline by almost two weeks.

“We have always said that the E3 Awards are about recognising the contributions of all sectors and communities,” explains 1EM managing director Mubarak Chati. “The extra award categories have been introduced in an effort to be more inclusive of different business types and, with the number of entrants now well up on previous years, we’re seeing strong evidence that companies are welcoming the move.

“But ‘inclusivity’ means more than just recognising different types of business. One of the most distinctive aspects of the E3 Awards is their diversity; we encourage representation from all parts of the North West community. In previous years, there’s always been a healthy mix of mainstream business directors,  female owner-managers, young entrepreneurs, people from  minority ethnic backgrounds and people dealing with disability and other challenges. We want that same diversity to be evident this year and every year that follows, so the awards remain as all-embracing as possible.”

The 16 award categories include:

Candidates may nominate themselves or they may be nominated by third parties.