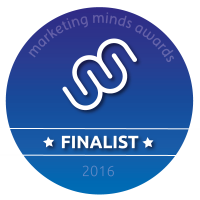 1 Events Media, the Blackburn based host of North West business networking events, trade exhibitions and awards has been shortlisted as a finalist in the 2016 Marketing Minds Awards, which will be held on Thursday 21st April at Cranage Hall in Cheshire.

The company, which itself hosts the annual E3 Business Awards and a busy programme of business-to-business networking events, was named one of four finalists in the category of ‘Integrated Campaign of the Year’. 1EM’s nomination centred upon its marketing of last year’s E3 Business Awards and a multi-channel campaign that utilised both conventional and digital media.

Reacting to the announcement, the company’s managing director, Mubarak Chati said: “It’s an unexpected pleasure to be named as a finalist in these awards. We’re normally very busy organising and promoting awards of our own so to see things from the perspective of the nominee is fascinating and, of course, extremely gratifying. A lot of hard work and planning goes into each year’s activity and this nomination is an heartening acknowledgement of that. The whole team is delighted that its work has attracted the notice of some of the region’s sharpest marketing minds.”

The inaugural Marketing Minds Awards are designed to celebrate the very best the of the North West’s thriving marketing sector and will take place alongside a major conference featuring eight experienced speakers. Amongst others, topics include brand-building, innovation on a budget, social trends and exploiting international markets. The event is intended as what the organisers describe as “a day of thought leadership, engaging conversation and sharing of best practice.”

More information about the Marketing Minds Conference and Awards, including a full list of finalists, can be found at www.marketingmindsconference.co.uk.

What an amazing illustration 💕

We have all come a long way to get to where we are today. When our MD asked his 9 year old what she thinks of his work, her response was “I just want you to stay alive” Thank you for everyone’s support and please #StayAlert, #controltheVirus #savelives

What our clients say

“First time for me at a speed networking event. Novel and brilliant idea!”

One of the best events

“One of the best networking events in the North West.”.

“Great team, atmosphere and networking opportunities! Highly recommended for anyone who wants to expand their reach in a calm and productive environment”.

“I would recommend that new businesses attend 1EM Networking Events”.

“I got lots of useful ideas and feedback, so I think it was an effective use of my time.”

“Let us help you generate a return on investment from Expos. We have over 20 years of experience in attending, exhibiting and organising expos”.

“With over 25 years’ experience, we can help you plan, organise and deliver high quality, well attended events”.

“We understand the importance of marketing and promotion.”

“Our main aim is always to complete the task successfully, within budget and on time.”