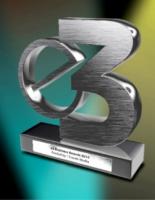 Nominations are now open for the E3 Business Awards – the North West’s premier awards programme for entrepreneurs and companies that are having a positive impact upon the region’s economy and on local communities.

The E3 Awards celebrate notable achievements in the fields of Enterprise, Education and Employment – the three ‘Es’ that are so important to the region’s fortunes. There are 12 award categories, which are open to individuals, business and social enterprises from all parts of the community. Mainstream businesses are very welcome – indeed, they accounted for a significant proportion of last year’s finalists and winners -but the organisers, 1 Events Media, are especially keen to see nominations from groups that are often under-represented in traditional business awards events. Amongst others, these include women, younger people, community interest companies and people from minority ethnic communities.
Those wishing to submit a nomination can do so by completing the online nomination form.The Awards evening itself will take place on Thursday 18th September at the Reebok Stadium in Bolton.
“The E3 Business Awards are not just about celebrating high growth businesses and those achieving huge sales,” said Mubarak Chati, director of 1 Events Media. “They are there to recognise enterprises and individuals whose work is helping to change communities, to create new opportunities for people and to revitalise the North West economy. There are many ways to do that and whilst the awards certainly do recognise the contribution of large and successful employers, we feel it’s equally important to celebrate those who are working hard on a more modest level to innovate, to overcome personal challenges and to lead by example.
“Nominations are open to everyone in the North West and we’ve deliberately chosen categories that should encourage applications from as many sectors and as wide a geographical range as possible.”
The twelve award categories include:
1. New Business Start-up of the Year
2. Corporate Social Responsibility Award
3. Social Enterprise of the Year
4. Skills, Education and Training Award
5. Employer of the Year
6. Digital, Creative and Media Award
7. Young Entrepreneur of the Year
8. Outstanding Woman in Business Award
9. Manufacturing Business of the Year
10. High Growth Business of the Year
11. International Business of the Year
12. Business of the Year
Using the online application form, candidates may nominate themselves or they may be nominated by others. Information about nominations, sponsorship or reserving places at the awards evening can be obtained by calling 1 Events Media on 01254 790 786.
Back to the Latest News Section
June 8, 2020

What an amazing illustration 💕

We have all come a long way to get to where we are today. When our MD asked his 9 year old what she thinks of his work, her response was “I just want you to stay alive” Thank you for everyone’s support and please #StayAlert, #controltheVirus #savelives

What our clients say

“First time for me at a speed networking event. Novel and brilliant idea!”

One of the best events

“One of the best networking events in the North West.”.

“Great team, atmosphere and networking opportunities! Highly recommended for anyone who wants to expand their reach in a calm and productive environment”.

“I would recommend that new businesses attend 1EM Networking Events”.

“I got lots of useful ideas and feedback, so I think it was an effective use of my time.”

“Let us help you generate a return on investment from Expos. We have over 20 years of experience in attending, exhibiting and organising expos”.

“With over 25 years’ experience, we can help you plan, organise and deliver high quality, well attended events”.

“We understand the importance of marketing and promotion.”

“Our main aim is always to complete the task successfully, within budget and on time.”